Category Archives: The Slaves of Ancius

The Slaves of Ancius – Part One 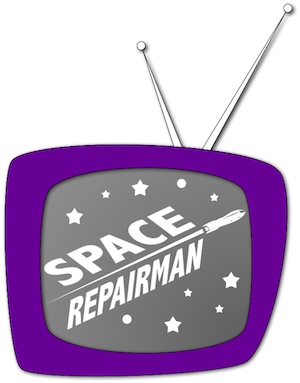 The space repair ship Ranger was always sluggish on auto pilot, exhibiting a puzzling tendency to drift back and forth across its course in a gradually-increasing arc as if sniffing a fading scent trail. And try as he might, Chuck Banner — reputed by many (not least of all by himself) to be the best fix-it guy in the sector — could not solve it, even with the help of his trusted companion, the cylindrical steel-cased robot Fast Repair and Equipment Delivery Device, or F.R.E.D.D.

As the Ranger waddled its way through the wispy train of a comet, Banner was too busy frowning at the central display monitor to notice the silvery wisps streaming by the cockpit window, fluorescing in colorful cascades as the electrically charged matter in the comet’s tail interacted with the passing ship’s electromagnetic field. Instead, he punched several buttons, grunted in displeasure, and picked up a multi-headed wrench from the console.

“I think the problem might be in the BF-46 junction,” he said, tapping the wrench meditatively against his chin.

The tape reels embedded in F.R.E.D.D.’s chest whirred and clicked for several seconds. “negative chuck,” he said, his eye lights flashing in sync with his words. “we dismantled and cleaned the entire bravo foxtrot series last week do you not recall?”

Banner waved the wrench at the screen in disgust. “Yeah, I know, but look at that spike. That’s where the autopilot servo signal dissipates, between 45 and 46.”

“that is not the behavior we observed last time,” F.R.E.D.D. commented in his metallic monotone.

“that would suggest the presence of multiple system malfunctions.”

Banner let his head drop into the palm of his free hand. “But I’ve already gone over the entire autopilot system from top to bottom.”

“perhaps we should put into a space dock and request the services of a space repairman.”

“ha ha ha ha ha” F.R.E.D.D. intoned. “i have been recompiling my humor tapes. i have one million of them.”

Banner was about to fire back a zinger of his own when the main speaker emitted a two-tone beep.

“incoming signal from the dispatcher.”

“Saved by the bell,” Banner said, swiveling his command chair to face the speaker on the console. He cleared his throat before flicking the microphone switch.

“Good morning, this is the Ranger, you nix ’em, we fix ’em,” Banner said in a cheery sing-song.

“Good morning, Clarence,” the Dispatcher’s sultry voice floated through the cabin like a puff of wood smoke. “I hope you slept well.”

“Like a baby, Dispatcher. I just want to thank you again for sending me to fix the gamble-bots on New Vegas. That was the best repair job I’ve had in a long time.”

“Did you win anything, Clarence?”

“Just the heart of a beautiful showgirl,” Banner said, fluttering his eyebrows suggestively. “But I told her that I had to get back to you, Dispatcher, so I left her behind.”

“That’s a sweet story, Clarence.” The Dispatcher lingered over his given name — which Chuck hated, and which only the Dispatcher used. “And as much as I would like to hear all about your escapades on New Vegas, I have a job for you.”

“Sure, but maybe next time you’ll meet me there? Let me swing you around the dance floor a few times.”

“I’m sure that would be lovely,” the Dispatcher replied in a voice that managed to sound both coy and cooled. “But first, your new job. I picked you especially for this one.”

“Let’s just say it requires your particular talents.” Banner leaned back in his chair, propped his feet up on the console, and laced his fingers behind his head as the Dispatcher continued. “You’re going to the Ancius Colony, at the outer edge of the sector. The capital city’s power station is starting to break down.”

“Ancius, huh? I’ve never been out that far. I thought they were mostly a farming colony.”

“The central continent is mostly agricultural, yes. But the colony has several small industrialized cities. The capital city is quite technologically advanced. That’s where they process their harvests for shipment to other colonies. Did you know that the nickname for Ancius is ‘The Breadbasket of the Sector?'”

“I’ve heard that.” Banner nodded appreciatively. “Sounds like they have quite the successful little operation over there.”

“Indeed, they are one of the most economically successful of Earth’s colonies. Their feat is even more impressive when you consider they were established only three generations ago and that their human population is among the smallest of any colony. Their remote location allows them to continue living the way they like with few administrative restrictions and even fewer visitors.”

Banner arched an eyebrow. “I know that tone in your voice, Dispatcher. You sure you just want me to stick with the repair job? Or would you like me to do a little . . . ” he narrowed his eyes, ” . . . looking around too?”

“Clarence,” scolded the Dispatcher. “You’re to land at the central space port in Ancius City. There, you will meet with George Cannie, the director of the central power plant. He’ll show you around.”

“That sounds fine, Dispatcher. I’ll change course right away.” Banner sat up and happily disengaged the balky autopilot. “I can’t wait to find out all about this economic miracle planet.”

The Ranger set down on an empty landing pad in the busy central space port near the heart of Ancius City. Banner left F.R.E.D.D. to supervise the refueling while he went to meet George Cannie, who was waiting for him near the edge of the platform.

“Chuck Banner,” he said, extending his hand as he walked toward Cannie, slinging his tool bag over his other shoulder. “A pleasure to meet you.”

“Likewise,” said Cannie, who was a full head taller than Banner with a wrestler’s physique. He wore plain dark coveralls. The man clearly spent his days moving machinery. “Welcome to Ancius. I’d like you to meet my daughter, Liz.” Cannie gestured to his left, to a young college-age woman in coveralls similar to her father’s, her brown hair tied back in a severe knot. “She’s studying engineering in school and apprenticing at the power station.” Liz appraised Banner neutrally with her cool grey eyes.

“How do you do,” she said, shaking Banner’s hand. Banner was surprised how rough her hand felt; she, too, worked for a living.

“Right this way,” Cannie gestured to the flight of stairs that descended along the side of the landing ramp. “We’re glad you could make it on such short notice.”

“I’m always happy to help. It’s certainly a beautiful colony you have here. I was admiring it as I was landing. This city is certainly impressive too.” Banner looked out to the skyline of gleaming skyscrapers, spread out uncluttered for miles. “Don’t take this the wrong way, but when people think of Ancius, they think of rolling farms and horse plows, not this.” He gestured to the skyline.

Cannie laughed. “Most of the human settlers on Ancius Colony are farmers, it’s true. But we have ample mineral and material resources on the other continents to build whatever we need. We believe that we can cluster the technology into one or two large cities and leave the rest of this temperate continent unspoiled for farming. And so far it seems to be working. Plus, the younger generation like my daughter here, they want a more exciting lifestyle. Farming isn’t for everyone, you know.” Cannie reached out to pat the shoulder of his daughter, who was descending the stairs ahead of him. She didn’t react to the touch or respond to the comment.

At the base of the stairs, Cannie turned and pointed to a circular, open-topped hovercar parked on the curb of a busy thoroughfare. Pedestrians bustled purposefully by in every direction.

“Our ride.” The driver hopped out to open the trunk, and Banner thought at first the driver was a teenager. But then under the chauffeur’s uniform he saw the driver had pale grey skin and eyes much larger than a human’s. The driver walked up to Banner and without a word took his bag and put it in the trunk, then gracefully returned to the driver’s seat.

“I see from your reaction that you’ve never seen a tharnallu,” Cannie said with a chuckle. “They’re native to Ancius. Remarkably intelligent but lacking any technology. They’re pastoral herders. Gentle but strong, they learn fast, and they’re tireless workers.”

“Interesting,” said Banner as he hopped into the car, noticing out of the corner of his eye that Liz Cannie was scrutinizing his reaction to the tharnallu driver.

“No, dad. I have to pick up those replacement points for the condenser unit first. I’ll be back in an hour or so.”

“Fine, see you there,” Cannie said with a breezy wave. “To the power station, driver.” The hovercar accelerated smoothly with an electric hum and merged smoothly into the busy traffic.

When the car was safely out of sight, Liz stepped back into the shadow of the landing pad and looked at the watch on her right wrist. She extracted a small ear plug attached to the watch by a thin cord, placed the bud in her ear, and tapped a button on the side of the watch.

“It’s me,” she said in a low voice as she looked around cautiously, even though none of the people hurrying by spared her even a passing glance. “The repairman has arrived.” She listened for a moment before nodding. “Yes, I’m sure he’s the one we want. He will be suitable for our purpose.”

Liz listened again for a moment. “Tomorrow morning, before the car picks him up to take him to the power station. He’ll be alone. No one will see a thing.” Liz paused, then nodded. Then she removed the earpiece and retracted the cable into her watch, and after another quick look around disappeared into the crowd. 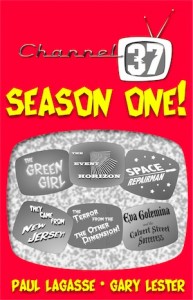