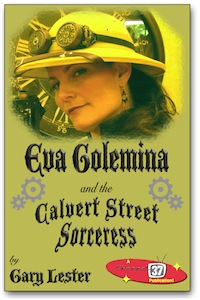 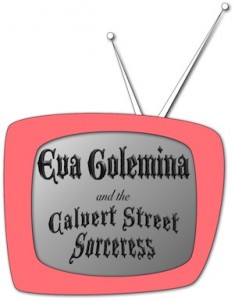 Eva Golemina surveyed her new apartment. The movers were gone, leaving numerous boxes strewn throughout the domicile. She looked at the work ahead of her.

In the center of the room sat her chair. The chair was well-reinforced to support her 375 pound body. Not that she was overly large; indeed she appeared as a normal woman. Her excess weight was primarily caused by the steel frame that supported the small boiler that powered her.

In the seven scant years since the “War to End all Wars” her life changed dramatically. Before the war, she lived a simple life tending her garden in a small suburb in London. Her husband, Sir Arthur Leviticus Tomlinson, the noted engineer, worked with the RAF developing numerous devices for those ungainly flying machines.

The patents he owned made them more than comfortable and looking forward to a pleasant retirement in the country somewhere. Yet, within a month of the war’s end, Eva – formerly Claire Rebecca Tomlinson was struck with a fatal disease. The disease slowly drained Claire and left her husband in a state of extreme anxiousness.

Being an engineer, he couldn’t grasp the fact that some things were not repairable. He began researching ways to heal, if not to “repair” her. His research took him to places such as France to visit notable scientists such as Madame Curie. He visited Prague to visit rumors of the magical being, the Golem of Prague. In his absence, he left Claire in the hands of the finest doctors that money could buy. The royalties from the patents paid for it all.

He at last returned, with a gleam in his eye and handwritten plans. He left early to test his ideas and stayed well into late evenings. At last one day he burst in her sickroom with great excitement.

“Claire, you have to come with me. There is something I must show you,” was all he said.

Thought the disease greatly weakened her, she knew that look and that there was no denying him. Leaning on his arm, she was lead to his private workroom in one of the annex buildings on the property.

Once in the workroom, he turned on the lights. On his worktable was a large object covered with a cloth.

“Before I do any more work on this, I wish to show you my idea,” he told her.

“An idea? For what purpose?”

She remembered the earnest look in his face as he grasped her hands. “I don’t want to lose you Claire. We have been through too much. It can’t end this way.”

“Arthur, the human body isn’t one of your projects. You can’t just replace one part for another. We just have to accept what is coming.”

He shook his head. “Ten years before the war, two American brothers figured out how to take to the skies. This last war has proved that air power is a force to be reckoned with. They did not accept that flight was impossible. Now it is probable that we will build bigger and bigger aircraft, perhaps even shuttling people across the seas.”

“Arthur, I know you’ve made great strides in air flight. But, you are not a medical doctor. All the finest say there is no cure for me. Don’t let yourself believe there will be.”

“Claire, I can honestly say I agree with you. I have argued with each and every doctor. I have seen your charts. Yes, there is no cure for you.”

“There is another already, Clair.”

She remembered the anger that welled up in her. “So, all your trips to France and Prague were just a ruse. You had no intentions in finding a cure, you were finding another woman.”

She wanted to slap the smile that appeared on his face. “I should like to introduce you.”

“I am not about to give you my blessing on some sordid relationship. You will have to wait to I am gone.”

She tried to leave, but her husband blocked the way.

“She is what I want to show you.” He walked over to the worktable and pulled off the cloth. Lying on the table was something that appeared to be the shape of a woman. But it was clearly not alive or for that matter, human.

“What kind of games are you playing, Arthur?”

“Claire, I wish to introduce you to Eva. Eva Golemina.”

“Oh dear Arthur, I have neglected you in my suffering. Obviously my condition has affected you mind. Please, let me go die in peace now.”

“No!” he shouted. He never did lose his temper and this display caused a great fear in Claire.

“Just listen to me. Eva is my creation. I have studied and discerned how to handle your death. Your body is wearing out. This is your new body.”

“Perhaps I have Claire, but hear me out.” Arthur went to Eva. He removed a panel over her abdomen. “What does that appear to be, Claire?”

Claire peered into the mechanism. She saw a round cylinder, with tubing with a black box attached to it. “It appears to be some sort of boiler.”

“Precisely,” Arthur answered. “This body is powered by steam. The black box houses radioactive material provided by Madame Curie herself. We, she and I, have developed a heat source that using crystallized carbon, which is slowly degraded by the radioactive substance. The process causes immense heat, which in turn operates the body, or as I refer to it, the golem.”

Arthur, you are no Victor Frankenstein! How dare you play God?”

“No, Claire, I do not pretend to be God. I am just using those gifts that he provides. Who knows perhaps there is some great purpose that He has in mind.

“I am no Victor Frankenstein. I have no secret magic like “galvanism” to give life to rotting flesh. Your flesh is failing you Claire, I cannot fix that. But what I can do is engineer a device to allow you to go on living.”

“Is it living to be encased if frame like that?”

“The important thing is that we will be together. When I have completed this, I’ll fashion one for me.”

That was the argument that won the fight. If she could sigh, she would have. The plan was sound, she thought. It was the chaos that ensued afterwards.

The operation was a success, the machine, the golem, worked perfectly. The name, Eva, was in honor of the first woman. Golemina meant the little golem. She would be the first, the first among those who had incurable diseases, those who had falling bodies, or those whose bodies were badly damaged from war or natural disasters. Sir Arthur began to prepare patents, and secure legal representation in several countries.

It was on his trip to file papers in America that he was killed.

Even though his will stated all proceed went to Eva, things fell apart for her quickly. Sir Arthur’s patents were outclassed by newer ones, the royalties dried up.

Eva decided the estate had to be sold. She left it all in the hands of Sir Arthur’s solicitor’s. She decided to move to America.

She had enough money to move and start a new life. She didn’t want to live in the most notable cities, like New York or Washington DC. She did want to be in between. She thought first of Philadelphia, quickly discarded that idea. She decided on Baltimore.

Her new apartment overlooked the Washington Monument in the Mount Vernon section of the city. Even thought the rent was rather extravagant, she did not need such things as food or furniture.

She had a great deal to do, organizing her husband’s notes, unpacking her supplies. She knew that would take a day or two at most. The question that haunted her was “What am I going to do to survive here?”