Blogging With Typewriters? Sure!

In steampunk, what’s old is new — and cool — again. But that’s not the only means by which retro-tech is finding new life these days. Case in point: bloggers who call themselves “typecasters,” who use manual typewriters as their blogging platform of choice.

There have been typewriter collectors and traders for a long time, but more recently people who like to actually use so-called obsolete writing technologies such as pens and typewriters have begun to come together in what they call the Typosphere. Its hub, Welcome to the Typosphere, is run by Michael Clemens, a long-time typecaster. One of the regular contributors is Richard Polt, a professor of philosophy at Xavier University who not only types the type — he wrote a scholarly treatise on the phenomenology of early typewriters — but also walks the walk. In addition to writing on WTTT, he collects typewriters and maintains the essential reference website The Classic Typewriter Page, which is your one-stop shop for finding, restoring, identifying, and loving your typewriter. Plus, the site has lots of great typewriter pr0n photos and essays too.

Many typospherians blog with their typewriters by banging out entries on a sheet of paper, then scanning and uploading the image. While this method definitely doesn’t aid keyword searchability, depending on the content that can be a good thing! They also get together at cafes and other places for type-ins, where they recreate the sound of offices and newsrooms past. (All you need is for someone to occasionally yell “Copy!”) Some of the daring ones even participate in NaNoWriMo as the Typewriter Brigade. I’d imagine that nothing makes you feel more like a word athlete than trying to pound out 50,000 words on a typewriter in a month. 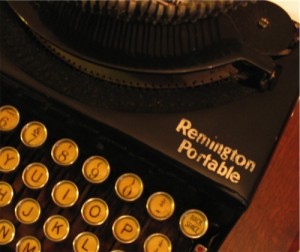 About six years ago, when I was looking for new and funky ways to play around with forms of written expression on my blog Sotto Voce, I experimented with posts written with a fountain pen and then on my old Royal typewriter, which just for fun I called “typecasting.” I had no idea whether anyone else was doing the same thing. Turns out, there were a bunch of others who all hit on the same idea on their own too, and gradually we all began to find each other and the term “typecasting” became the term of choice for what we were doing. (Holy cow, I just found out that it’s even made it to Wikipedia!) I don’t do much typecasting anymore, but it sure is fun to see how it has continued to grow and expand.

Not only that, but the typosphere performs a vital public service by helping to keep more typewriters out of the hands of people who chop off the keys to make jewelry. (*shudder*)

When they first came out around the turn of the last century, typewriters were lamented by many as the herald of an impersonal mass-produced form of communication because their identical machine-made type faces erased the writer’s personality from the page. Fast forward a century and you’ll hear people decrying social media for many of the same reasons. Funny how we have come to feel that typewriters reveal the quirks and personality of the writer after all! So I guess, by extension, that there’s hope for social media too.

So if you’re looking for the next old thing, consider pulling that old Remington out of the attic or picking up that Royal in the corner of the antique store, dusting it off, threading a fresh ribbon, ratcheting in a sheet of white paper, and joining the retro-future.

And remember: if you know QWERTY, thank a typewriter.

4 Responses to Blogging With Typewriters? Sure!