The Terror from the Other Dimension! – Part One 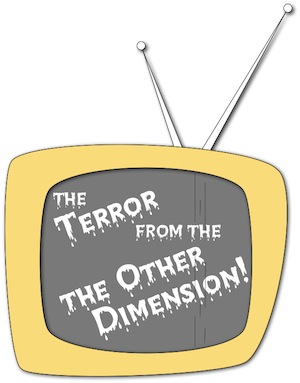 The reporter lit another cigarette with his trembling hands as he stared at the blank sheet of paper he’d scrolled into his battered Remington. He pushed his fedora back to wipe the perspiration from his forehead and took a long drag on the cigarette before stabbing it out alongside the five others he had abandoned. Then with a new sense of resolve, he finally began to type.

Looking back on it now, he began, who could have foreseen that the world-shattering events of the past three weeks would have begun in such a seemingly ordinary way, with two cars found abandoned on a deserted country road in the dead of night?

Patrolman Johnson picked up the heavy silver microphone from the dashboard of the police cruiser and pushed the transmit button. “Car Twenty-two Bravo here, over.”

“Report your position please, over.”

“Car Twenty-two Bravo, roger. We are on Highway Thirty, just past the old McKenna farm, over.”

Patrolman Smith, behind the wheel of the cruiser, groaned. “Fifteen minutes to the end of the night shift. We almost made it home on time tonight. For once.”

Patrolman Johnson chuckled and shrugged. “You know how these farmers are. One of those Air Force jet jobs flies over, and they think they’re seeing monsters from Mars.” He keyed the microphone. “Car Twenty-two Bravo, roger. Will investigate and report. Over and out.”

The patrol car’s headlights picked out twin pools of light on the empty highway until a few seconds later they caught a wooden sign with crudely painted letters. “KELLEY SWAMP.” An arrow pointed to the right.

“I haven’t been out this way since I was a kid,” Smith said as he leaned forward to get a better view of the rutted trail.

“Hey, what’s that?” Johnson pointed to a shiny object glinting at the edge of the headlights.

As the police cruiser drew closer, they could see it was the back end of a big Plymouth sedan, its chrome bumper reflecting the headlights. The car looked like it had been driven half off the road. Both front doors were open.

Smith brought the car to a gradual stop. “Doesn’t look like there’s anyone inside,” he said. “Hit it with the spotlight.”

Johnson rolled down the passenger window and turned on the spotlight bolted to the side of the cruiser. “Two thirty-nine Mary Baker Eddy,” Johnson read off the plate. “That’s Carl Peterson’s car. What the heck is Carl doing out here at this time of night?”

“I don’t know,” said Smith as he opened the driver’s side door and cautiously stepped out. “Carl?” He called. “Carl, you out here?” Johnson followed his partner out of the car. Aside from the crunching of their footsteps on the gravel, the only sounds they heard were crickets and a distant owl. The patrol car’s headlights and spotlight illuminated the car and surrounding road, and the officers cast long, jerky shadows as they approached the car.

“I don’t like the look of this,” said Johnson, drawing his revolver. Smith did the same. “Carl? Mister Peterson?”

“Wow, look at this!” Smith said, pointing with his gun to a blackened hole in the ground about four feet away from the driver’s side door of the Plymouth. The dark circular scorch mark stood out from the illuminated ground.

Johnson knelt alongside the hole, pushing his visored cap back on his head to scratch his forehead. “What do you suppose did that? Looks like a lightning bolt! But there’s not a cloud in the sky.”

Smith walked around to the open passenger door. “Will you get a look at this!” he said. Johnson stood and walked around the car to where Smith stood. He was looking at an identical scar in the ground. “Doesn’t that beat all?”

Suddenly, a high-pitched warbling sound filled the air. Both policemen looked around and then finally up.

“What’s that?” Johnson shouted over the din, pointing. Smith raised his revolver and fired three times in quick succession. Suddenly a cone of bright light descended on Smith and he disappeared with a scream of terror. Johnson dropped his revolver and started to run back toward the patrol car, but he tripped on a rock. Trying to get back up, he looked skyward as another cone of light descended on him. Johnson had only enough time to raise his hands to protect his face and scream “NO!” before he, too, disappeared.

Just as suddenly as it had started, the whistling stopped. After a few moments of silence, one by one the crickets started chirping again and the owl resumed its minor-key monologue. The bright lights of the patrol car only illuminated two fresh black gouges in the dirt road, wispy trails of smoke emanating from their charcoal-like centers.

This entry was posted in The Terror from the Other Dimension!. Bookmark the permalink.