Balticon 46: Return of the Pulps

Greetings, regular Channel 37 readers and new friends from Balticon 46 and all the ships at sea. We interrupt our regularly-scheduled serial to bring you a special edition of 37 Minutes with news on the highlights of the last four exciting, action-packed days.

First of all, it was great to meet so many of our regular readers in person, and thrilling to be told by so many people, “Channel 37? I’ve heard of you guys!” The praise we received from fans and professionals alike buoyed us immeasurably. Thank you, all of you, for your support and your readership. We promise to continue to produce stories and features that are worthy of it.

Perhaps the most important theme that wove through many of the panel sessions on which we participated is the continued rise of serial science fiction in e-print format, and the slow but steady growth of paying markets for short fiction. In addition to the continued success of e-book versions of such industry stalwarts as F&SF and also of born-digital publications such as Clarkesworld, the resilience of FlagShip magazine — published by our table-mates, Flying Island Press — gives us hope, as does its recent transition to a monthly schedule. 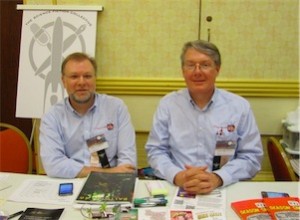 There is still much experimentation to be done. For example, what is the ideal form for serial and short fiction? Is it a traditional subscription-based magazine publication such as the above-mentioned? Is it perhaps in anthology form, such as Brand Gamblin opined at our panel on the future of serial fiction? Is it in the form of a free or subscription-based blog, such as the amazing Daily Science Fiction, which is well into its second year?

One thing that seems fairly certain, according to Scott Sigler, with whom we shared a panel, is that serial fiction is likely to migrate from podcast audio to digital text as its primary home. Podcasting, he believes, has owned serial and short fiction for so long because not only were the methods of production fairly simple, but the methods of mass distribution and revenue generation — thanks largely to Podiobooks — were in place fairly quickly to help authors monetize their stories.

On our last panel, with fellow distinguished guests D.C. Wilson, Brand Gamblin, and Nathan Lowell — who kindly agreed to step in as moderator at the last minute — we discussed the obvious need for serial fiction to have something similar, in order to begin to reach a similar critical mass. The most exciting moment of the whole weekend for me was when Brand said that he’s had a cool domain name for a year that he’s been looking for something to do with, and creating a “Podiobooks for e-zines” would be a perfect use for it. Channel 37 is proud to say that it will be working with Brand to help bring this most amazing prospect to fruition in the near future. 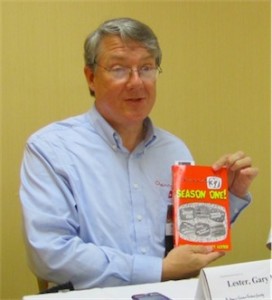 Gary Lester reads from "They Came from New Jersey!" at Balticon 46

During the panel, which was titled “Serialized Science Fiction: the New Pulps?” Nathan asked the important question, “Why ‘pulps’?” To which Paul replied, “Because it’s still the wild frontier right now.” Revenue-generating e-zines for short and serial science fiction magazines are an untested market just like they were 90 years ago, when they first emerged in science fiction. The low cost of distribution via the Internet — analogous to the early days of pulps, when they could be shipped in bulk by rail instead of mailed by comparatively-expensive post — promise a lower break-even point for publishers and higher pay for authors. And the advent of so many channels of distribution means that we face a lot of experimentation to determine how people will want to pay for and read their fiction.

“I think that’s going to be my favorite quote from this convention,” noted Brand.

5 Responses to Balticon 46: Return of the Pulps