The Attack – Act I 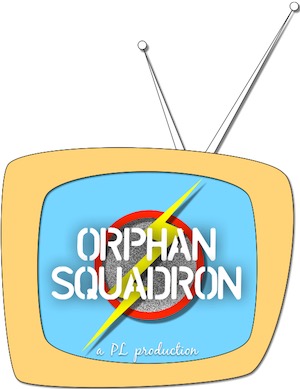 In the thirty-fifth century, the military breeds identical twins to serve as disposable space warriors. When a twin is killed in combat, the survivor is shipped off to a labor colony — or worse. They call these forgotten soldiers “orphans.”

But one man believes these discarded and broken men still have a purpose. Against orders, he has recruited the downtrodden . . . the forgotten . . . the hopeless . . . to fight again. And to lead them, he has chosen a legendary veteran who has vowed to kill no more.

With nothing left to lose, they take the missions that no one else wants — or dares. They are . . . the Orphan Squadron.

Port, the de facto capital of the prison planet Rendios, has more drinking establishments than most major cities have houses. Which is not surprising when you consider the number of Port residents who spend all their time in such places because they quite literally have nowhere else to go.

There is a hierarchy of bars in Port, starting with dive and working their way down from there. The rungs they inhabit on the social ladder largely reflect the relative status of the people who frequent them. At the bottom of the pecking order are the petty criminals and the slow-witted genetic failures on whom they prey. Above them are the mercenaries and cargo runners who keep the city supplied with alcohol and psychotropics in exchange for all the noxious petrochemicals they can squeeze out of the spongy ground.

Next up are the pack infantry orphans, the sole surviving twins from the Uncle through Zebra tubes of their particular genetic line. Gigantic and perpetually aggressive, these ex-soldiers spend most of their time engaging in massively destructive brawls. Few entrepreneurially minded exiles are willing to cater to the pack infantry.

The Loves through the Nans are much more civilized, having served in the Conglomerate military as bomber, reconnaissance, and cargo pilots. But being smarter and better educated, they are also more likely to resent being shipped off with the surplus equipment just because their twins had been killed in combat — or worse, in some meaningless accident. Having already been dealt a middling genetic hand, the mid-alphabet orphans tend to be the most unhappy with their lot. No one enjoys hanging around in their bars.

The best establishments cater to the Ables through the Kings, bearers of the freshest artificial genetic material and therefore the Conglomerate’s elite warriors. Near-perfect physical specimens possessed of superior reflexes and unnerving intelligence, these seven batches of clone pairs fly the Conglomerate’s hottest, most powerful combat spacecraft on the most dangerous missions — until they are orphaned. When they’re shipped off to Rendios as surplus, most of them eventually find their way to the Gene Pool.

Inside the Gene Pool’s cavernous hall, the sounds of laughter, arguments, and war stories was as thick as the cigar smoke. Between the haze and the dim lighting, it was almost impossible to recognize anyone just a few feet away — a condition that is far from accidental. Past the pool players, the arcade gamers, and the martial arts duelists, in the darkest back corner of the bar, are the high-backed booths where the regulars met when they had serious things to talk about.

In one of these booths, Jig Cypress sat opposite two equally massive veterans trying to convince them to join his new squadron. But he was not having much luck. The reason was pretty obvious.

“Able Sequoia,” one of the men snorted, gesturing into the gloom. “No one here would ever saddle up with that scum. Not after what he did on Shalamand.”

Cypress shook his head and rubbed the blond stubble on his bowling-ball head. “You’ve got it all wrong, Fox,” he said. “This is Colonel Brookbine’s idea. He’s got the Conglomerate’s support.”

“Yeah, but he’s not going to be leading the squadron into combat, is he?”

After a moment’s hesitation, Cypress shook his head, his eyes downcast.

“Why’s he want Sequoia anyway?” the other pilot growled.

“Look, Dog, you know he and Baker were the best fighter pilots the Conglomerate had ever bred.”

“But Baker’s dead,” Dog replied. “Thanks to his brother. And everyone knows that half a pair is as good as no pair at all.”

Jig pointed sharply at Dog’s chest. “See, that’s just what they want you to believe. Sure, we don’t have the psychic links that we used to, but what about all your skill and your experience and your knowledge? It’s stupid for the Conglomerate to just waste all that. And from what I hear, they can’t afford to be throwing away skilled pilots right now.”

“Who cares?” Fox said after downing the dregs of his pint. “Not our war anymore.”

“But see, it can be again. We are biologically programmed to do one thing: fight. This new squadron is Colonel Brookbine’s way of helping us keep on living the life we were programmed for.”

Jig slammed his fist on the table, rattling their mugs. “Listen to me. I trust the man. He saved my life in combat just last week.” Jig caught the expressions of surprise on their faces. “Yes, Able Sequoia in combat! I was there. We were doing recon in the asteroid field. The Vortani had set up a secret refueling base there. We were jumped by two Targons. One got on my tail and Able chased him off.”

“No,” Jig replied slowly. He had hoped he could avoid this particular detail.

“Wait, don’t tell me he is still on his pacifist kick? ‘I will kill no more’ and all that?” Dog and Fox both roared with derisive laughter. Jig’s cheeks flushed with a combination of embarrassment and anger.

“He’s figured out a solution, okay? Yeah, he won’t kill, but he won’t let anyone else get killed either. Look, it’s hard to explain. Hell, I don’t think I fully understand it myself. But I’m telling you, the man is a stone-cold warrior in the cockpit and I wouldn’t be here trying to talk you into working with the man again if I didn’t believe it with every strand of my DNA.”

Struck by Jig’s passionate defense of his former enemy, Dog and Fox stopped smiling. They looked at each other and, after a moment, both turned back to Jig and shrugged.

“Not like we have anything better to do,” added Fox.

Jig nodded his thanks. He couldn’t help but notice that both men were grinning again, but this time they were grins of anticipation — a feeling that few, if any, of the Gene Pool’s other denizens had likely experienced since arriving in Port.

Jig Cypress slowed the hover-jeep as they approached the spaceport’s Gamma block, then turned left at the second row. He stopped in front of the fifth hangar, where he saw Colonel Brookbine standing and looking skyward. Jig and the other two orphans climbed out of the vehicle as it settled to the ground.

“Colonel Brookbine, I’d like to introduce you to two fine pilots,” Cypress said as he walked over to the Colonel. “Dog Cedar and Fox Elm. I flew with them both — Dog was with Five Wing on Certorax Prime, and Fox was the exec on the Astoria.”

The men took turns shaking Brookbine’s hand. “Jig here has spoken highly of you both. It’s an honor to meet you.”

“Likewise, Colonel,” Dog, the taller and more gregarious of the two. “Your reputation precedes you.”

Brookbine shrugged humbly. “Thanks for coming. Your timing is good,” he said, pointing up. “Able is returning from test-flying one of our new LM-20s. The first six arrived today.”

“I’d pit a squadron of Twenties flown by veterans like you against any of the latest and greatest with fresh greenies in the seats,” replied Brookbine.

“Well, not until we’ve had a little practice first,” Fox retorted with a chuckle. “I guess that’s why we’re here.”

The rumble of propulsors descended from the sky behind the men as they turned to watch the ungainly fighter descend, the boxy propulsors on either end of its stubby wings rotated to assist in a vertical landing. With a hydraulic whine, the landing gear doors opened and stout landing legs unfolded from the belly and nose. The men stepped back as the exhaust plumes kicked up dirt and debris. Once the gear touched down and absorbed the weight of the massive fighter, the engines’ notes descended through the scale as they spun down. The twin canopies on top of the crew pod opened just before the engines stopped altogether. Able Sequoia and Peter Juniper climbed out of their cockpits and climbed down the crew ladders that had emerged from the hull as the canopies opened.

As the quartet of observers began walking toward the ship, they were brought up short by the sound of Able shouting at Peter.

“You call that sensor platform aligned?” Able swept his left arm back toward the ship. “We were at least ten degrees off! Do you know what would happen to us in combat with that kind of misalignment?” Able leaned menacingly over the shorter mechanic, beads of sweat shining on his dark, bald pate.

Peter’s cowed response was inaudible as Able roared again. “That’s no excuse! The sensors either work or they don’t! But what difference does it make to you? You’re not out there with your life on the line. You just sit here safe on the ground while I’m getting my rear shot off because of a faulty sensor!” Able ended his diatribe by shoving his helmet into Peter’s chest and storming off into the hangar, not noticing the men staring in disbelief at his outburst. Seeing them and blushing deeply, Peter ran into the hangar as well.

After a moment, Jig broke the silence. “What was that all about, Colonel? I know he’s been getting more and more edgy lately, but I thought it was just because he’s working twenty-seven hours a day to get the ships ready.”

Brookbine shoved his hands in his pockets as he turned to face the inquisitive men. “Tomorrow’s the third anniversary of Shalamand,” he said quietly in his basso voice. “I don’t think he’s aware of how much it’s been eating him.”

Jig caught the exchange of glances between Dog and Fox, and turned to Brookbine, a sour expression on his face. “You know, none of this is helping my sales pitch.”

Stay tuned for Act II of Orphan Squadron: The Attack, right after these messages!