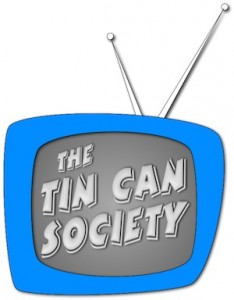 The Tin Can Society faced a big challenge in trying to find the missing NASA rocket engineer, Mr. Finchley. All they had to go on was that Dominic had spoken to him on the phone the previous day, and that he hadn’t shown up to the scheduled meeting to pick up the satellite film canister. But they didn’t know where Mr. Finchley was calling from, which meant that they didn’t know where to begin looking for him. Huddled together in a secret meeting Dominic’s and Debbie’s living room, they discussed their options.

The situation was so serious that they weren’t even watching the news update on the TV behind them, showing pictures from the Gemini mission currently in orbit. Something more important to the Tin Can Society than a space mission? Only a couple of days ago they would have scoffed at the notion. But not since embarking on this adventure.

Finally, they agreed that their only option was to go to Police Chief Wilson at the precinct station on Main Street and explain the situation. They hopped on their bikes and rode the few blocks to the station, and the rest waited in the marble-floored lobby while Dominic went up to meet the Chief. Fortunately, Chief Wilson was a friend of the family and a regular donor of cans to the Society, so when he heard that Dominic wanted to see him he was more than happy to meet.

“Thank you for seeing me, Chief Wilson,” Dominic said as he sat down in the chair in front of the Chief’s desk.

“Happy to, Dominic,” Chief Wilson said as he closed the door to his office and sat down behind his enormous, paperwork-covered desk. “What can I do for you?”

“We have a mystery. We were supposed to meet a man from NASA this morning, but someone else showed up instead. This other fellow seemed shifty and I didn’t trust him, so we didn’t give him what he wanted but he doesn’t know that yet. We want to find the NASA man before the other guy comes back.”

Chief Wilson, who had been sipping coffee while Dominic told his story, put the cup down. “We received a call from NASA a few days ago that they were going to conduct a search in the area with the Army. They said they were looking for pieces of a satellite. They contacted all the local officials to ask for cooperation. I spoke with a Robert . . . what was it?” He scratched his chin. “Finchley. Robert Finchley.”

Dominic nodded. “Mr. Finchley asked us to help find a particular piece of the satellite. We found it and we were going to turn it over to him but then he didn’t show up to the meeting.”

Chief Wilson opened a desk drawer and rummaged around inside. “Finchley gave me the name and number of the hotel he was staying at in case I needed to get in touch with him. Here it is.” He pulled out a business card and read the back of it. “The Cortland Hotel on Fourth. Room 340.”

“Now be careful, Dominic. Don’t do anything dangerous. If you see anything that looks illegal, call me and stay away. Okay?”

“Absolutely, sir. Thank you.” Chief Wilson stood, and they shook hands before Dominic eagerly headed out the door and back to the lobby to share the news.

The six members of the Tin Can Society left their bikes on the grass front lawn of the Cortland Hotel, a white concrete building that had been finished only a couple of years ago and was one of the fanciest modern hotels in this part of Connecticut. As they walked into the vast, airy lobby, Dominic whispered, “You wait here. I’ll go ask.”

Rodney put his hand on Dominic’s shoulder. “I’ve got this one, chief. That’s Mrs. Turnbull behind the counter. Her daughter Agnes is in my class.”

Dominic smiled. “It’s all yours, charmer.”

Rodney pulled a comb out of the pocket of his shorts and slicked back his hair, and sauntered over to the counter. “Hello, Mrs. Turnbull. My name is Roderick Swenson. I’m in your daughter’s class. Is the lovely Agnes here, by any chance?”

Rodney, using his “stage name” as he called it, chatted amiably with Mrs. Turnbull for several minutes before returning. “Well, that went very well. Mrs. Turnbull is a very charming lady, just like her daughter. It seems that Mr. Finchley has checked out rather suddenly. But she was more than happy to let me look for the electric razor that my Uncle Bobby had forgotten while he was staying here.” Rodney held up a key. “Room 304, I believe.”

Throttle whipped up the visor on his wobbly space helmet. “How did you do that?”

“I mentioned how much I was hoping to help Agnes with her math homework next week,” Rodney said. “I would say everyone’s a winner on this deal.”

The Tin Can Society disembarked from the elevator on the third floor and Dominic cautiously unlocked the door to Room 304. They waited for a few moments to hear any sounds, but all was silent. They crept inside.

The room was empty, just a clean hotel room. Everything was folded and stored neatly; there were no signs of a struggle or forced entry or someone leaving in a hurry. They opened every closet and cabinet door, but there was nothing. No suitcase, no suits hanging in the closet. It was as if Mr. Finchley had never been there.

They were just about to leave when Ham sat down in the deeply padded lounge chair by the bed. “I give up,” he said. He looked down at the chair and saw the corner of a piece of paper sticking up between the cushion and the padded armrest. “Hey, what’s this?” He pulled out the paper and unfolded it. Written hastily with a ballpoint pen:

“Look at this!” Everyone gathered around the chair to read the note in Ham’s hand.

“What does that mean?” “Is it a secret code?” “Maybe Mister Finchley left it for someone to find!”

Phillip took the note from Ham and studied it very closely. The Tin Can Society’s resident mathematician, Phillip was excellent with codes and had even devised the Society’s cipher for secret messages.

Phillip studied the note for several seconds before looking up and declaring, “The warehouse on Sycamore.”

“Which one? There’s a whole bunch down there.”

“The one with the train tracks, of course.” He tapped the sheet of paper. “Mister Finchley must have overheard the people who were kidnapping him talking, and when they weren’t looking he made this quick note and stuffed it in the chair.”

“Come on,” Dominic said. “Let’s go!” Ham bounded out of the chair to catch up with the rest of the Tin Can Society as they ran out of the hotel room.

Sycamore Street runs for two miles out of Stratton, and it dead-ends at an old abandoned rail yard that still had several large brick warehouses left standing. It was one of the places where the teenagers went at night to party, but otherwise no one went there and the place had become overgrown with weeds and piles of abandoned car parts and furniture.

The Tin Can Society rode as quickly as they could to the spot, and at the fence at the edge of the property they dismounted their bikes and pushed past the crooked gate into the compound. They proceeded carefully past the empty, hulking warehouses. Phillip pointed to the last warehouse, which still had a stretch of rail line running alongside it. Silently, they made their way closer. Suddenly, Dominic — who was in the lead — stopped and then quickly pushed everyone back around the corner of the warehouse next to their objective.

“What is it?” Debbie whispered. “What’s wrong?”

Dominic backtracked around to the front of the warehouse, then motioned everyone to go inside through the barn-door like opening, which was fortunately ajar. Once inside the spookily dark and cool warehouse, Dominic ran over to the row of dirty and broken windows that faced the warehouse by the tracks. They crouched below one of the windows.

“Look, but be careful,” Dominic whispered. Slowly, he raised his head until his eyes were above the windowsill. A moment later, five other pairs of eyes followed suit.

The side entrance to the warehouse with the tracks was clearly a brand-new door; unlike the other warehouse doors, it was freshly painted and not dented. The door was also clearly secured with a shiny silver padlock and a hefty chain. But that wasn’t all.

On either side of the door stood two creatures. As tall as a grownup, they had cylindrical barrel chests that resembled giant canister vacuums. The cylinders were topped with semi-transparent semicircular domes where their heads should have been — one them had a red dome, the other one’s dome was blue. From the middle of their chests stuck out two stubby arms with claws on the ends, and they were perched on short, stubby legs with no visible knee joints and with large rectangular feet.

The two mechanical men were clearly standing guard on the entrance to the warehouse, inside of which, presumably, Mr. Finchley was being held.

“What do we do now?” Ham finally whispered.

Dominic took a deep breath. “We have to find a way to get in there and free Mister Finchley.”

Throttle raised the visor on his helmet. “I think I have an idea,” he whispered, hastily removing the Army bag that he habitually wore over his shoulder. “You’ll love this.”

What does Throttle have up his sleeve? Will Dominic and the gang be able to rescue the NASA engineer from the clutches of the robots? And will they discover the secret of the mysterious scientist in time to protect the secret film canister? Find out more in the next exciting episode of The Tin Can Society!

One Response to TCS Part 4: The Search for Mr. Finchley