Christmas in the 1960s, at the dawn of the Space Age, was pretty cool for a young kid, I hear. There were great real-life adventures going on in space, lots of cool TV shows with great gizmos, and — thanks to the miraculous transistor — inexpensive high-technology available for fun and games.

As the last of five kids who were all born or grew up in the 1960s, I inherited many cool toys from my older brothers. As beat-up and well-used as they were for me, they were still pretty impressive; I can’t imagine how awesome they must have been when they were brand-new OOTB (that’s “out of the box,” for you non-nerdy types — as if there were any reading this! *geeksnort*). Here are some of my favorites. I imagine that the kids in The Tin Can Society probably asked for a lot of these too: Revell 1/24 Scale Gemini Spacecraft. Gemini was the muscle-car of spaceships, with a real fighter-plane cockpit, ejection seats, and a whole squadron of macho astronaut pilots to fly them. There were an incredible ten manned flights in just two years — enough to make it seem like a weekly moon shuttle would be just around the corner. What kid wouldn’t want to be a Gemini spaceman?

This is a huge kit when assembled — big enough to pretend you’re sitting in it on a space mission (which I used to do for hours). The twin doors swing open to reveal a fully-detailed cockpit full of dials and switches, and the astronaut suits are really detailed with straps and buttons and all that. You can run a complete mission from launch to splashdown with this monster, but you’ll have to imagine the launch booster — or make one yourself.

Estes Flying Model Rockets. If you wanted to supplement the space missions in your imagination, there was no better way than flying model rockets. What a great way to learn the whole shebang: proper tool use, structural engineering (so you don’t believe it when the instructions say to cut the balsa wood fins so that the grain is parallel to the leading edge? Go ahead, try it without it. You’ll see.), aerodynamics and ballistics, electricity, chemistry — even proper painting technique. A couple of burns and cuts were a small price compared to the thrill of seeing something you created take off on its own, arc into the sky, pop its ‘chute, and come gliding gently down to Earth again — and be ready to do it again!

The thing about model rocketry, though, is that it fills all the senses. Not just the visual thrill of a launch, but also the tactile feel of smooth-sanded balsa fins and the tackiness of dried white glue on your fingers. The smell of a fresh coat of spray paint. The inimitable hissshhhhh of a rocket leaping off the pad. The unforgettable acrid smell of a freshly-burned motor — the smell of “mission accomplished.” It’s truly a sensory feast!

Archer Space Patrol Walkie-Talkies. On any mission — whether exploring deep space or spying on the enemy’s camp — good communications are essential. And for generations of young astronauts and spies, the radio of choice was the Archer Space Patrol walkie-talkie by Radio Shack. Rugged and reliable, it came with a plastic belt pouch so you could pull it out quickly (you couldn’t help but feel like Captain Kirk when he whipped out his communicator to call the Enterprise). Plus, it came with a Morse code option, and the Morse alphabet embossed on the back, in case you needed to send a coded signal because you couldn’t talk “in the clear.” 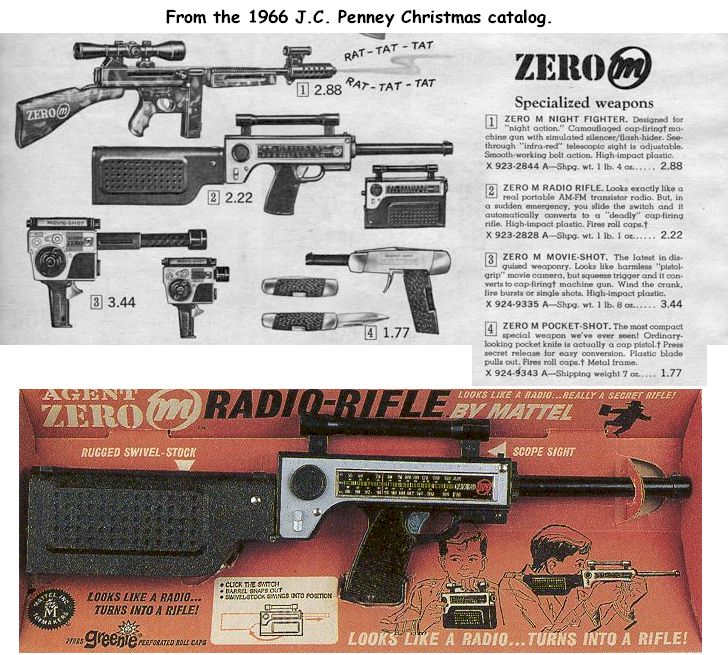 Agent Zero-M Gear. Let’s face it, you can’t play astronaut all the time. Sometimes, you have to be a spy, risking your life for glory and adventure in a whole different arena. With shows like I Spy and The Man from UNCLE showing just how glamorous the spy’s life can be, how can you resist? The thing is, every good spy will tell you that you’re only as good as your gadgets. And there were no finer gadgets than those designed for Agent Zero-M, whose adventures were featured in comic books in one-page adventure ads. For traveling incognito, Agent Zero-M’s gear was peerless — a transistor radio that sprang apart to form a sniper rifle (with the handle serving as the scope), and instant cameras, movie cameras, and even a pocket knife that popped open into pistols. Perfect disguises — no adult would ever know you were on a secret mission of national urgency. (And when secrecy wasn’t important, there was always the super-sexy Man from UNCLE pistol.)

As you can see, Christmas at the dawn of the Space Age was wonderful!