M2M Part 2 – “The Most Exciting Journey Ever Undertaken” 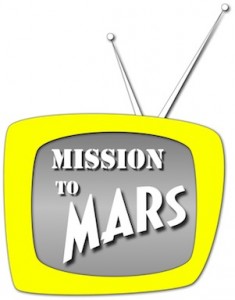 In our previous installment, USAF Colonel Elizabeth Braden learns that she has been chosen to command humanity’s first expedition to Mars. As a last-minute replacement for the mission’s original commander, Braden must quickly familiarize herself with her new assignment and with her crew – particularly her second-in-command, who had expected to be named commander instead . . .

Standing behind a curtain, Liz Braden straightened her uniform and checked her hair one more time to ensure that it was pinned professionally in place. Following her departure from Orbital Station McKinley and subsequent landing at the Kennedy Space Center, she’d barely had time to get out of her space suit and into her uniform in time for the press briefing that General Carstairs had arranged to announce the crew of the Mars Expedition – a briefing for which, until just a few hours ago, she had expected to be in the audience, not seated at the table.

“Ladies and gentlemen of the press, thank you for coming,” a NASA spokesman could be heard saying on the other side of the curtain. “NASA and its international partners have been working closely to train and prepare a crew of its finest personnel for what will be the most exciting journey ever undertaken by mankind – the first journey to Mars.”

“To ensure that our hand-picked crew would be able to train thoroughly and without distraction, we have until now held the names of the crew in the greatest of secrecy. But today, with the beginning of this epic mission just two weeks away, we would like to introduce them to you.” There was a pause. Braden could imagine the spokesman making a dramatic flourish. She held her breath as she looked around to the five other, equally nervous, faces around her. As the Air Force liaison to the NASA Mars Program Office, she knew these other men cordially. Now she would be spending over a year in close quarters with them.

What a way for them all to meet as a crew – in the glare of a thousand flashbulbs.

“Ladies and gentlemen, may I present the crew of the Mars Expedition.” Braden swallowed, stiffened her back, and stepped out from behind the curtain, her first official act as mission commander.

The glare from the television lights and flashbulbs was blinding, and the sudden eruption of applause filled the auditorium like a slow explosion. Through the glare and noise, Braden concentrated on finding her way to the far end of the long conference table, and took a seat behind a tent card with her name on it. One by one her colleagues filed in as the announcer read their names.

“Colonel Elizabeth Braden, United States Air Force. Commander of the Mars Expedition.” She remembered to turn and look at her colleagues as they entered and sat.

“Major Marshall Endicott, United States Air Force. Command Pilot of the USSES Percival Lowell and commander of the landing mission.” Endicott sat stiffly next to Braden, pointedly not making eye contact with her.

“Master Sergeant Vincent Boggins, United States Air Force. Mission communications and maintenance specialist.” Despite herself, Braden smiled at the sight of “Boggs,” her former crew chief. His stout frame and beefy face seemed ill-suited to the formal uniform he wore for the event.

“And lastly, Gilles Serrona, of the French Academy, the world’s leading expert on the geology of Mars.” Braden studied Serrona carefully; the least well-known of the crew, he had been hand-picked by diplomats rather than scientists, and some felt that his presence was an intrusion. But he seemed pleasant enough, with an open face, coolly appraising eyes, and a patrician nose.

As the applause died down, the announcer turned to face the assembled crew. “Colonel Braden?”

Braden stood as the applause swelled again, and she waited until it crested and receded before speaking. “Good afternoon, and thank you for coming today. It is an honor to be here, in command of humanity’s first mission to another planet. In just two weeks, the United States Space Exploration Ship Percival Lowell will be embarking on a four hundred and twenty day round-trip journey to Mars. Our plan is to spend forty days on Mars, exploring the surface by land and air, and studying it from orbit. We have assembled a fine crew and it is a real honor to be selected to be their leader. I look forward to flying with them, and I hope they with me too.”

Braden had made up that last sentence on the fly; the prepared speech that had been shoved in her hands on her way from the landing strip to the press conference had been written for her predecessor, John Walden, now in the hospital with acute appendicitis – and of whom none of the press would ever hear about in connection with this mission. Braden wished she could publicly acknowledge him, since he had been crucial to the success of the program up until now. For the first time, it began to sink in – she would have to carry on for him. 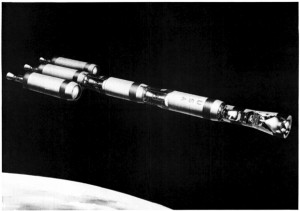 “As our colleagues in the Apollo program continue to explore the lunar surface in preparation for our first permanent bases there, we are proud to receive the baton from them and run the next leg of mankind’s race to the heavens.” She fought to keep from rolling her eyes. Who writes this stuff?

“As you know, the Lowell, named after the famous astronomer, is the largest and most complex spacecraft ever built.” As a slide of the spaceship appeared on the screen behind her and above the heads of her seated colleagues, she turned to point to its various features. “It consists of two components – the space acceleration component and the smaller spacecraft portion at the front. The space acceleration component is a three-stage booster assembled from identical NERVA nuclear rocket engines. The first stage, which will propel us out of Earth orbit, consists of three NERVAs. The second stage, which propels us into the gravitational capture of Mars, consists of a single booster. Finally, the third and final stage will propel us home.”

The slide changed. “The spacecraft portion consists of a cylindrical mission module with four decks: deck one is the living quarters; deck two is command, control, dining, and recreation; deck three is storage and an emergency radiation shelter; and deck four is the science laboratories with facilities for bioscience, electronics, geophysics, and optics. At the base of the module is the Mars lander; at the top end is the small re-entry vehicle that we will use to land on Earth when we return.”

“The Lowell was assembled in orbit from components manufactured on Earth. As you know, these components have been launched in a series of flights by specially uprated Saturn V boosters similar to the ones that carried our first lunar explorers. The components were assembled and tested at Orbital Station Peary. In just a few days, we will be ascending to orbit ourselves in a Big Gemini to begin the final checkouts, complete our training, and – ” she took a deep breath – begin our journey. Now I’d like to take questions from the audience.”

The press kept them there for over an hour, asking questions ranging from the highly technical to the highly personal. Braden was more than happy to let her colleagues answer most of them; on the surface, it made her look like a deferential commander; in reality, of course, they knew much more than she did. She listened carefully to the answers, both to inform herself and to get to know her new crew. She was pleased to see that they were clearly comfortable working together, often referring questions to each other and engaging in casual banter.

But Endicott was still making a point of avoiding eye contact of longer than just a moment. Clearly, their upcoming conversation was not going to be pleasant.

Once the press had asked everything they could think of about topics ranging from orbital insertion velocities to Collinson’s real feelings about Yorkshire pudding, the NASA spokesman thanked the crowd for coming. The crew received another wave of applause, punctuated by hearty cheers, as they departed behind the curtain.

Safely out of sight, the six of them sighed in relief. Boggins loosened his tie and unbuttoned his shirt’s top button. They congratulated each other and shook hands, and gradually they departed one by one. Braden and Endicott lingered strategically behind.

Braden opened up the conversation by turning to face Endicott directly – not easy to do, since the muscular Major was a full head taller than her. “Major Endicott, the first thing I need to tell you is that this wasn’t my idea.”

Endicott’s steely gaze bored into her. “No?” It was the first word he had spoken to her all day.

“This was General Carstairs’ doing. I found out this morning when he ordered me to fly up to McKinley for a briefing. When he told me what happened to John, I assumed you would be named commander.”

“But you didn’t turn the offer down, did you?”

“How could I? It was an order. I did protest on your behalf.”

“Look, Major. We’re about to spend four hundred days cooped up in that pressure cooker together. I didn’t ask for the job, but I’m damn well going to carry it out. And you will too.” She warmed her voice. “I think you are the finest possible choice to be the first man to set foot on Mars. This is a lousy situation for both of us, but I want us to get off on the right foot.” She extended her hand. “Deal?”

Endicott paused, staring at Braden’s hand for a long moment before shaking it slowly and firmly. “Deal.” He took a breath. “I respect you too, Colonel. I’ve been with the program almost as long as you have. But I’ve been John Walden’s right hand for two years now. I know the man inside and out. We’re a team.” He paused. “Were a team. Aside from him, no one knows this mission, this spacecraft better than me.”

Braden smiled. “Then I guess I’m lucky he got appendicitis instead of you.”

Despite himself, Endicott chuckled. “It’s going to take time, Colonel.”

“Let it take time, Major. We’re about to have plenty of it.” They shook hands again, and Endicott left.

Braden walked out from behind the curtain into the now-empty auditorium. A white plastic scale model of the Lowell was perched on a stand in the middle of the table. She stared at it a long time, trying to imagine being inside that tiny space for over a year with five people she barely knew, one of whom resented her being there.

“Well, that could have gone worse,” she said to herself, then straightened her uniform jacket and walked purposefully out of the room.