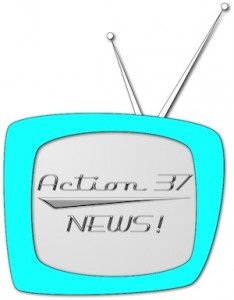 A wonderful time was had by all at the 23rd annual conference of the Maryland Writers’ Association yesterday at the University of Baltimore’s Thumel Business Center. We were especially pleased to be able to show off the new Channel 37 banner, hot off the — what, the presses? Is there such a thing as a banner-press? It’s a mystery. But anyway, here it is: 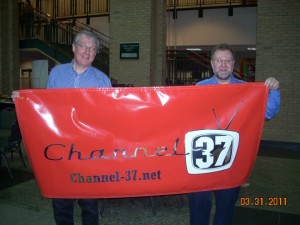 At lunch, Gary and Paul participated in the Buskers’ Cafe by interrupting the proceedings with an “urgent announcement” about Channel 37. Here’s an audio recording of our little schtick (I don’t seem to have an option to embed the file in the post, but it I can figure out a way to do it, I’ll come back and update the post accordingly), and here are a couple photos. That’s Gary “They Came from New Jersey!” Lester on the left, and Paul “Space Repairman” Lagasse on the right: 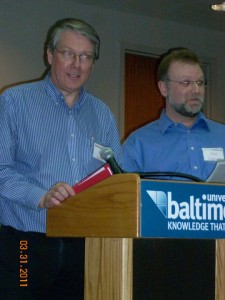 Many thanks to Laura Shovan, editor of the new MWA poetry anthology, Life in Me Like Grass on Fire: Love Poems, for the photos. Eagle-eyed readers will note that Laura was somehow able to travel back in time two days to get these photos — which probably won’t surprise anyone who knows the supremely talented Laura, but to us mere mortals an amazing and wondrous feat nonetheless, and one for which we at Channel 37 are deeply grateful!

A big thanks also to Fernando “The Word Pimp” Quijano III for coordinating the Buskers’ Cafe, and for letting us “barge in” on him the way we did. We’re lucky he likes SF as much as we do!